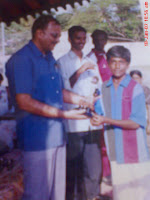 Even Getting a small Cup, in sports, as a prize, in front of 10 people is something. but think, how you will feel, if u get a CHAMPIONSHIP from police officer, in front of 2000 people?

Normally in all school, they will conduct most of the sports event, before the sports day, and on sports day,only important events will be conducted. CHAMPIONSHIP, will be given to the best students, over takes the overall lead in points, which will cover many field and track events. like, if u get 1st prize, u will be awarded 5 points, and 3 points and 1 point for 2nd and 3rd prize respectively.

i was studying 7th standard (age13), in Ramakrishna mission school, t.nagar, Chennai. i was coming under JUNIOR CATEGORY. i was so poor in Field events. but i was bit smart in track (running). just 1 day before the sports day, my over all points was "0". and many of my friends, were having 5, 6 and 1 of my friend even had even 9 points. but i had a small wish. at least to win 100 and 200 meters, which will be conducted on SPORTS DAY, and to tell you, i was selected in top 8 runners in our category.

At first, i had never thought about CHAMPIONSHIP, as my over all points was "0". but my team captain, told me that in senior category, for sure, our team member will be taking championship. and gave me a small advice, to concentrate on 100 and 200 meters running, and told me that, i have a chance to win the championship, as i can get up to 10 points there. that night, i was not able to sleep. i had a small feeling, me with championship cup ............hm !!!!

At first call for 200 meters came. i took the lead at first, and continued it till the end. wow...i had never had such an encouragement before in my life and i finished 1st, and completed half of my dream. but i had another half to complete. again my team captain came to me, and advised me the same. i said, i will do, what i can do. and same like as 200 meters, i was consistent, and grabbed my 1st position in 100 meters too. hm !!! i had a wonderful day. my team also took the over all CHAMPIONSHIP, with me and 1 of my friend, taking individual CHAMPIONSHIP in JUNIOR and SENIOR category. the day, i can never forget in my life. and still i can feel that day !!!!

note: in the pic, me taking individual CHAMPIONSHIP from a police office with my PE teacher standing behind with red t-shirt

Really a memorable one for all of us man,....