Do u believe in Evil Spirits? 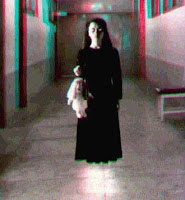 I was thinking, about that THEY. i felt that, there are different kinds of profession. and i thought, there must special class of people, who create fear among people and they are making it as a profession.

But, to be frank, i dont no much about this evil spirits and i have never experienced any. but when ever we sit and have some chit-chat with friends, they main topic which will come is Ghost.

Now i am going to tell you 1 incident, which really happend. and i am sure, after reading this you will get a impression that, some evil spirits even exists.

He is 1 of my elderly friend. he is just like me, never believes in evil sprits. but a true incident happend to his son, after which he started believing about evil sprits. yes !! here you go. (warning: do not read this alone.)

Due to workload, he was forced to shift his house. he shifted with his wife and his son, who is 3 year old. evereything was normal when he was in his old house. but the problem started after he shifted. EVIL SPRIT !!!

The target was his 3 year old son. 1 day around 1 am, his son woke up and started crying. they thought it was a casual 1, which normally happens to small kids, if their sleep gets disturbed. but it did not stopped that night.

Every night he started crying at 1am. my friend got scared. his wife called her parents. her parents came. they did the same thing what usually grand parents do. they kept the broom stick near to them, which is considered as protection from evil sprits.

That night same thing happend. Small boy started crying. nothing else. he just crys for sometime and then goes to sleep. in the morning he is as usual normal. then they staretd sharing the incident with neighbours. then the got the real answer.

Neighbours say that, before 1 year a small kid died here. the sprit of the small kid is calling all small kids to play with him etc etc....... they also say that, it happend with many people who stay around here.

Then they got more fear and they shifted their house. as they shifted, small boy got normal. nothing happnd to him. he sleeps well now.

wat say ? what is your answer if i ask you, do u believe in evil sprits ? yes or no?

Man. what conclusion i can give to this topic. sorry i cant give a conclusion.

please post a comment to this article with your or your friends experience on evil sprits. may be after redaing all the comments, we will conclude.

KARTHIK
Posted by Unknown at 4:11 PM